The Medal of the Erwin Schrödinger Institute for Mathematics and Physics for the year 2021 is awarded to Elliott Lieb, Professor Emeritus at Princeton University.

Professor Lieb is honoured for his deep and groundbreaking mathematical analysis of fundamental problems and models of many-body physics, foremost his works of recent years, which continue to be outstanding and inspiring to a new generation of mathematical physicists. Two highlights in the realm of Coulomb systems are a mathematically rigorous justification of the Local Density Approximation in Density Functional Theory, and a proof of the equivalence in the thermodynamic limit of three different definitions of the minimum energy of a homogeneous electron gas (joint work with M. Lewin and R. Seiringer).

The award ceremony will take place on November 5, 2021, at the Erwin Schrödinger Institute in Vienna. 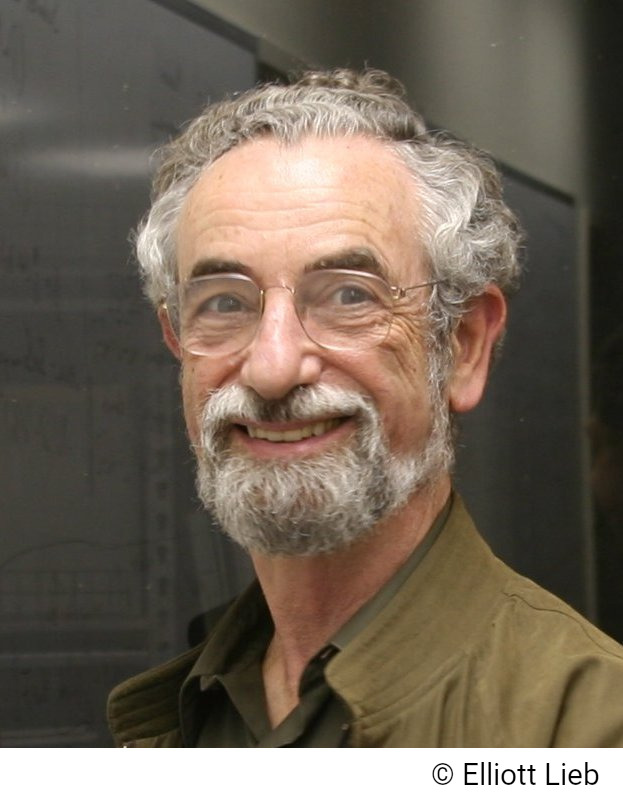 Elliott Hershel Lieb, born in 1932, obtained his B.S. degree at the Massachusetts Institute of Technology. From 1953 until 1956 he studied at the University of Birmingham in England for his Ph.D. Back in the US he held postdoctoral appointments at the University of Illinois and at Cornell University and a permanent position at IBM. He then moved on to Yeshiva University in New York, Northeastern University in Boston and to MIT again. In 1975 he became a full Professor at Princeton University.

Elliott Lieb is one of the founding fathers of modern mathematical physics and one of the most influential personalities worldwide within this discipline. He has made important contributions to a broad range of topics such as models of statistical mechanics, especially exactly soluble models, many-body quantum physics, including the Bose gas and Bose-Einstein condensation, inequalities for quantum entropy, the quantum theory of Coulomb systems including density functional theory and exact results on atoms and molecules, stability of matter, matter in strong magnetic fields, harmonic maps and liquid crystals, quantum electrodynamics, the second and the third law of thermodynamics, and sharp constants in fundamental inequalities of functional analysis. His list of publications presently counts around 400 items and the number of his collaborators exceeds 90. This includes many younger colleagues who have become leading scientists on their own. His work has set a gold standard in mathematical physics through its extremely high quality and has inspired generations of mathematical physicists.

The Medal of the Erwin Schrödinger International Institute for Mathematics and Physics, or ESI Medal, awarded in 2020 for the first time, has been created to recognize outstanding achievements in any area of mathematics or physics, including contributions at the interface of the two fields.

The recipient of the ESI Medal receives a medal, a certificate and a monetary award of 4,000 Euro.

After a summer, in which at least some hybrid activities welcoming visitors on-site could take place, the ESI is closed again since the beginning of October. Nevertheless, thanks to the efforts of some organizers, some online activities could be offered. We very much hope we will be able to have on-site events soon, but currently it is unclear when that will happen. We will continue to monitor the situation closely and post any changes on the ESI webpage. With best wishes for the Holiday Season,

The Erwin Schrödinger Institute for Mathematics and Physics congratulates Roger Penrose, Reinhard Genzel and Andrea Ghez, this year's winners of the Nobel Prize in Physics. They are awarded the prize for their groundbreaking work on black holes.

A recent lecture of Prof. Penrose given at the ESI can be found here.

The Award Ceremony for the first ESI Medal will take place on September 24, 2020.

The Medal of the Erwin Schrödinger Institute for Mathematics and Physics for the year 2020 is awarded to Anton Alekseev from the University of Geneva.

Prof. Alekseev is honoured for his recent outstanding contributions to mathematics, in particular for the discovery of the link between the Grothendieck-Teichmüller group and the long-standing Kashiwara-Vergne problem in Lie theory, for the program of tropicalization of Poisson structures, and for the proof of the Goldman-Turaev formality in 2-dimensional topology. His work unites brilliant intuition, deep knowledge, and remarkable technical skills.

The award ceremony will take place on September 24, 2020 at the Erwin Schrödinger Institute.

The Medal of the Erwin Schrödinger International Institute for Mathematics and Physics, or ESI-Medal, awarded in 2020 for the first time, has been created to recognize outstanding achievements in any area of mathematics or physics, including contributions at the interface of the two fields. 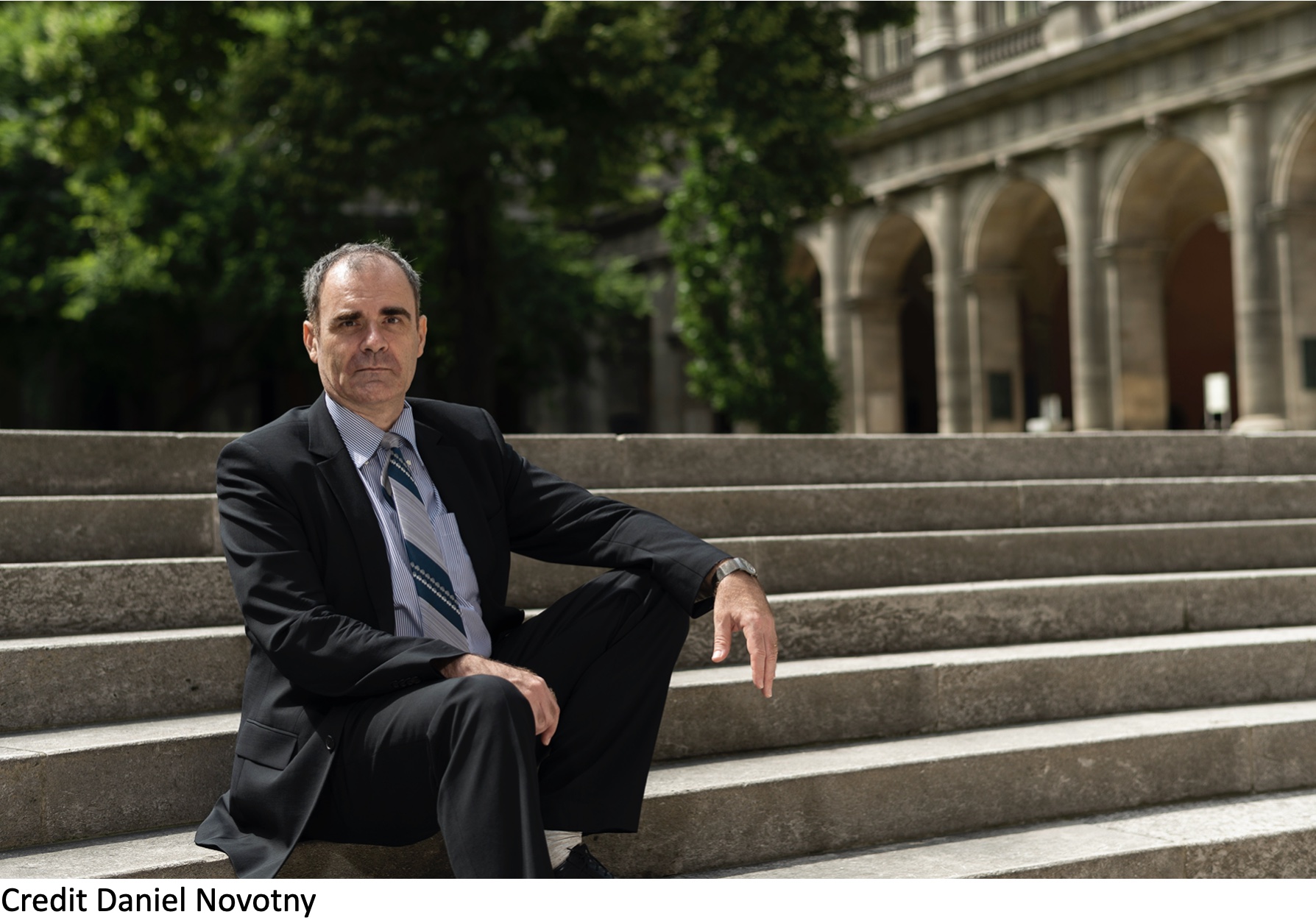 ESI-Kollegium Member Adrian Constantin has received the Wittgenstein-Award 2020 of the Austrian Science Foundation (FWF), the most prestigious science award in Austria. Adrian Constantin is a world leader in the theory and the application of nonlinear partial differential equations. Two of his articles are among the 10 most cited papers ever to be published by the journals in which they appear, which, in turn, rank among the most prestigious journals in all of mathematics: Acta Mathematica and Inventiones Mathematicae. Moreover, Adrian Constantin is listed as an ISI Highly Cited Researcher with more than 160 publications and 11000 citations.

The research of Adrian and his collaborators includes seminal contributions to fluid mechanics and geophysics, e.g. the proof of existence of rotational traveling water waves of large amplitude (with W. Strauss) and rigorous qualitative studies of wind-driven ocean currents. Adrian has developed and established novel analytical techniques that help unravel notoriously difficult wave phenomena in the oceans and in the atmosphere.

We congratulate Adrian on the Wittgenstein-Award 2020!

Deadline for submission of ESI Thematic Programmes postponed to October 1

Since March 11, 2020, the ESI has been closed and all activities planned until the end of June have been cancelled or postponed to a date to be determined. At the moment it is unclear when the ESI can resume operation and we are in touch about that with the organizers of activities due take place during the summer and fall.

We will continue to monitor the situation closely and post any changes on the ESI webpage.

Information regarding coronavirus (updated on March 11, 2020)

Following a directive of the authorities, the University of Vienna has implemented a series of measures against the spread of the virus. These measures include cancellation of all events involving visitors starting on March 11, 2020 at least until April 3, 2020.

As a consequence, all activities at the ESI in the period March 11 - April 3, 2020 are cancelled. This includes workshops, research in teams as well as individual visits.

Current information about the situation at the University of Vienna is available here.

Further information on the school can be found here: https://vds-physics.univie.ac.at/winter-school-2020/

Attendance of the day is free of charge and without registration. Please feel free to spread the word among your colleagues.

The following workshops have been confirmed for 2020:

On December 16, 2019, 5 pm, the ESI is going to host an Erwin Schrödinger Lecture featuring Douglas N. Arnold from the University of Minnesota.

As usual, this Erwin Schrödinger Lecture is directed towards a general audience of mathematicians and physicists. In particular it is an intention of these lectures to inform non-specialist and graduate students about recent developments and results in some area of mathematics or physics.

The ESI has now launched a video recoring system in the Boltzmann lecutre hall. From now on lectures will be recorded, given the consent of the speakers. The videos are made available through the ESI YouTube channel. We hope that this additional feature for documentation will be welcomed by all speakers and organizers and we hope for their support in this matter.

We are informed from time to time by visitors of scamming actions in connection with their accommodation booking. Please note that you in general will not be contacted directly by ESI partner hotels about any issue regarding your reservation or booking unless we inform you that they will get in contact with you or asked you to do this by yourself. The ESI has not authorized any travel agency to act on its behalf. If you are contacted by anybody else then the ESI administration to make a hotel booking or any down payment by credit card please ignore this message.

Please inform us if you have received a suspicious phone call/email. We are trying to do our best to identify the source and to verify the message.

Thematic Programmes at the ESI in 2021

The following thematic programmes at the ESI are scheduled for 2021:

May 31 – July 9, 2021: The Landscape vs. the Swampland
Organizers: Gary Shiu (U of Wisconsin-Madison), Washington Taylor (MIT, Boston), Irene Valenzuela (Cornell U), Timm Wrase (TU of Vienna)

This summer the new website of the ESI has gone online. Thanks to Sascha Biberhofer for making this possible. From now on all ESI visitors are asked to register online via the ESI website “login”, manage their stays and submit their talks online.

Thematic Programmes at the ESI in 2020

The following thematic programmes at the ESI are scheduled for 2020:

On December 6, 2018 at 5 p.m. the ESI is going to host an Erwin Schrödinger Lecture, featuring Monika Henzinger, a professor of Computer Science at the University of Vienna and a former director of research at Google. She received a PhD from Princeton University in 1993 and subsequently held positions at Cornell University, Digital Equipment Corporation, the University of the Saarland and the École Polytechnique Fédérale in Lausanne. Monika Henzinger is the recipient of numerous grants and awards including an NSF Career Award, an honorary doctorate from the Technical University of Dortmund, as well as an ERC Advanced Grant. In her research, she focuses on combinatorial algorithms and data structure and their applications.

As usual, this Erwin Schroedinger Lecture is directed towards a general audience of mathematicians and physicists. In particular it is an intention of theses lectures to inform non-specalists and graduate students about recent developments and results in some area of mathematics or physics.

Abstract: Real-world graphs are huge and many of them change dynamically. Thus to compute properties of these graphs we need dynamic graph algorithms that efficiently maintain properties of dynamically changing graphs. We present the state-of-the-art in dynamic graph algorithms and explain some of the techniques that they use as well as recent progress in giving lower bounds for their running time.