Public transport in Vienna is convenient and safe. Trams and underground trains generally run until midnight on weekdays and throughout the night on weekends. Information on first and last trains is signposted at each station. There are also night buses.

Inside each bus, underground train or tram there is a list of all the stops on that line. The routes with all stops are signposted at bus and tram stops.

Ticket vending machines take Euro-notes and credit cards but it is advisable to have some small change on you. Zone 1 ("Kernzone") covers all of Vienna, while Zone 2 also covers the outskirts of Vienna including Vienna Airport (Schwechat). Vending machines are available in all underground and train stations and can be switched to English and several other languages. A single trip inside Vienna costs EUR 2,40 and can be bought by pressing the "Einzelfahrt Vollpreis"-Button. Tickets are also available at newsagents, tobacconists ("Trafik"), or ticket offices at railway stations. Single trip tickets are also available but more expensive on trams and buses (note, you will need coins for the vending machines).

Transportation from the Airport (Wien Schwechat) to the City

Taxis from the airport (http://www.viennaairport.com) to the city centre are expensive. Limousine service can be ordered online, for example from http://www.airportdriver.at (EUR 33).

If you prefer public transportation you can either take the CAT train (online price EUR 11 one way, EUR 19 return) to "Wien Mitte, Landstraße" or use the regular train S7 in the direction "Floridsdorf" to "Wien Mitte, Landstraße". For this trip, you need a 2-zone ticket (EUR 4,80) which covers transport to your destination within Vienna. The S7 train leaves from the airport every 30 minutes. Tickets are available from a vending machine on the platform from which the train leaves.

"Wien Mitte, Landstraße" is a central train and subway station from which you can easily reach all places in the city center such as the Institute or your hotel.

Getting to and from the ESI

Getting to the ESI from Landstraße/Wien Mitte:

To get to ESI from Landstraße/Wien Mitte take underground line U4 direction Heiligenstadt. Get off at Friedensbrücke, take tram Nr. 5 direction Westbahnhof or tram Nr. 33 direction Josefstädter Straße and get off at Spitalgasse/Währingerstraße.

Getting to the ESI from tram stop "Währingerstrasse/Spitalgasse": Google maps.

Travelling on either of the trams no. 5, 33, 37, 38, 40, 41 or 42 you need to get off at "Währingerstrasse/Spitalgasse". Then walk along "Währingerstrasse" towards the city centre and take the next turn on the left into "Strudlhofgasse", and then take the next turn on the left into "Boltzmanngasse". The ESI is about 30 metres down on the left hand side at number 9, the door is in the narrow passage way passing the fenced-in area of the American embassy. Inside the building walk up to the top floor, turn right and you are at the entrance of the ESI. The administration office is at the third door on the right, and open from 9 am to 6 pm on weekdays.

The Faculty of Physics is almost next door to the ESI, at Boltzmanngasse 5.

The Faculty of Mathematics in "Oskar-Morgenstern-Platz 1" is 15 minutes walk from the ESI: Coming out of the ESI turn right then left into "Strudelhofgasse" and down the stairs ("Strudelhofstiege"). Go straight until you reach "Liechtensteinstraße", then turn right and walk on for about 200m. Cross the street at the pedestrian crossing and walk across "Bauernfeldplatz" passing by "Café Rochus" on your left. Then you turn right into "Porzellangasse" and keep following the street (it will eventually be called "Berggasse") for about 10 more minutes. Oskar-Morgenstern-Platz is located on your right hand side. 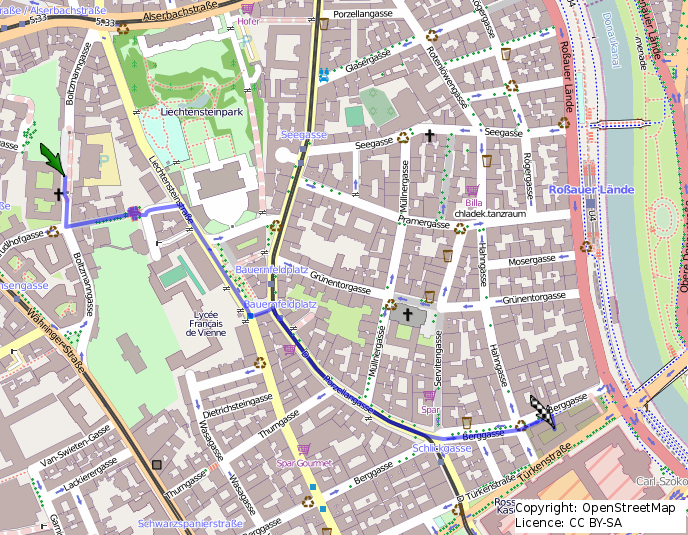